Christopher Nolan has several generally considered masterpieces under his auteur’s belt with Inception, The Prestige, The Dark Knight, Interstellar, and Memento, but his latest tour de force, Dunkirk, the cinematic version of the British stiff upper lip, could be his Magnum Opus.

WARNING: This review may contain potential spoilers, but if you’re British, you should already know about your own history.

When 400,000 retreating Allied soldiers find themselves on a cold, desolate beach directly out of a travel agent’s nightmare, surrounded by advancing Nazis, and unable to get home; home came for them.

The film contains very little to no dialogue, being carried along the way by a perfect marriage of visuals and sound. It’s the loudest silent film I’ve ever seen. The piercing noise of an enemy aircraft swooping down towards defenceless, young men on a beach, followed by a thunderous explosion, attacks your senses. The accompanying music throughout is constantly tense, devastating, and relentless. Edward Elgar would love it.

There is no doubt in my mind that the Academy Award for Best Score will be going home with Hans Zimmer. 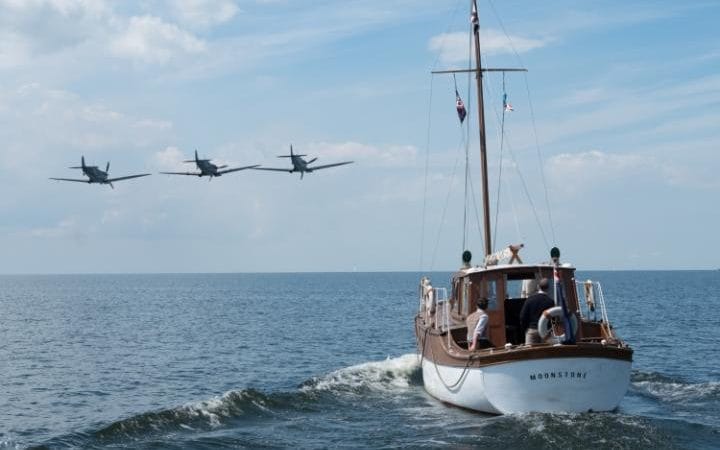 Some critical observers say it lacks characters, story, and depth, but in my opinion, it doesn’t need it. War doesn’t have time for fictitious characters, overdrawn introductions, or love stories. You don’t need to think about the person, but the situation. Every soldier on that beach was in the same boat (pun intended). It allows you to watch the drama unfold. Nolan was aiming for you to experience the fear, horror, and sheer desperation to survive with them; you are the character. You are there with them. It’s “virtual reality without goggles”.

I absolutely hate paying extra for anything other than the already overpriced, standard cinema ticket, but Dunkirk needs to be seen in IMAX. See it before it’s too late, and all you have left is the edited TV version with adverts, or Digital Download to watch on your 6″ phone screen. This is not a film; it’s an experience that makes you feel bloody proud to be British. Up yours, Hitler.

Rating: 5 out of 5 popcorns

*Shout out to the woman sitting next to me who had the entire history of WW2 explained by her husband, who then exclaimed, “Oh, Kenneth Branagh was in it?” during the end credits.

Beam to the Reviews